I began working with the canine and feline species at 13 years of age at ‘Windmill Farm’, a large local boarding kennels and cattery.
At 15 I moved on to ‘The Mardens’, another establishment which offered a superior standard of boarding and here I learned a great deal about hygiene, general healthcare and management, the breeding and rearing of puppies and studwork as well as the art of handstripping a terrier’s harsh coat by the proprietor, Patricia Breach, who bread the ‘Hearn’ Cairn Terriers.
I worked here for three years, at weekends and school holidays, whilst studying at Coloma Convent Girls’ School in Croydon where I obtained 11 ‘O’ levels and studied ‘A’ levels in physics, chemistry and biology.

In 1986 I accepted the position of Manageress of ‘Northover’ Kennels and Cattery in Warninglid, West Sussex and spent my two days off a week studying at ‘The London Academy of Grooming’ in Hounslow, Middlesex to become a Canine & Feline Beautician. My career with animals developed further when returned to live in Croydon and became a Veterinary Nurse for three years at two different practices, namely Peter Coughlan in Addiscombe and then Anita Patel in Warlingham. During this time I continued grooming as a mobile Canine Beautician and also supplemented my income and gained more social skills and experiences by working nights in ‘Elliots’ wine bar , ‘The Jolly Farmers’ Public House and ‘The Dog & Duck’ Public House.

Before marriage and the birth of my sons, I spent a year as the groomer at ‘Arden Grange Quarantine Kennels & Cattery’ in Albourne , Sussex , home of the ‘Ardenburg’ German Shepherd Dogs.In 1996 I set up my own grooming salon in Coulsdon, Surrey , which soon became very busy and rapidly outgrew the space it occupied.

Following an injury to one of my own dogs, I used Hydrotherapy as a form of treatment and as an aid to her recovery. I was so impressed by its many benefits that I looked further into this complimentary therapy and decided that a pool of my own would enable me to use my nursing skills and offer a challenging new aspect to my canine career. I also needed larger premises to cope with the ever increasing workload………so………. 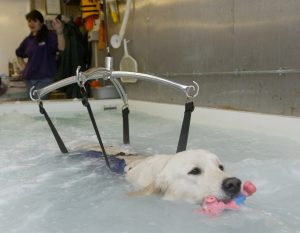 In 2002 “TRIM and SWIM” Canine Hydrotherapy & Professional Grooming Centre , proudly opened a seven days a week service – a new shop with a modern, hi-tech, state-of-the-art grooming salon for all breeds of dog, cat, rabbit and guinea pig, which catered for 60-80 grooming clients a week. 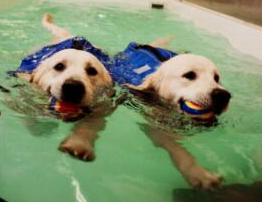 The premises also incorporated a heated Hydrotherapy Pool and Hotspa/jacuzzi, both especially designed for dogs as a form of physiotherapy and as an aid in rehabilitation – post operatively or following injury ; swimming has also proven most beneficial for arthritic care and pain relief, for increasing mobility and for improving muscletone and for weight loss.
The pool is also used just for fun & fitness and cardiovascular workouts. Up to 90 dogs were able to be swum per week.

A keen animal lover from a young age ; I have had a variety of pets including a hamster, goldfish, rats, mice, snakes, several rabbits, Zebra finches, numerous cats and litters of kittens. My passion, however, has always been all aspects of dogs. My original choices were to own a German Shepherd, a black Curly Coat and a Golden Retriever…….. I have yet to own a Curly…!!!
During my teenage years I had the enormous pleasure & enjoyment of working for ‘Paul & Sheila’ of ‘Framed Philatellics’ fame on their trade stand at various Championship Dog shows around England ( which sold Canine art, stamps, postcards, prints and trinkets etc) including multiple years at the prestigious ‘Crufts’ and also helping prepare stock for the upcoming shows. 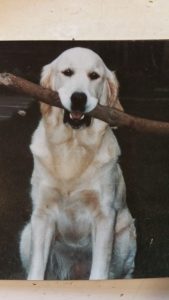 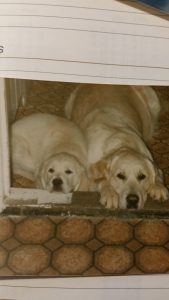 as did my first homebred litter of ‘RAMCHAINE’ Golden Retriever puppies sired by SH CH Nortonwood Silvanus.
I am privileged to have had the pleasure of owning quite a few Golden Retrievers and 2 GSDs of my own (‘Kyra’ & ‘Kaine’) and have now whelped and reared quite a few litters of Ramchaine puppies. Temperament, health, soundness and breed type are of paramount importance in the breeding programme and all potential breeding prospects are screened under the current Health Schemes for hereditary defects.

I have enjoyed taking part in agility and obedience training and competitions. While in England the aim was for all my dogs to work towards getting their bronze and silver and gold Kennel Club Good Citizens Awards. In the past some of my dogs have also spent time as ‘PAT’ dogs visiting the disabled and the elderly in hospitals and homes.

A very keen exhibitor at both Open and Championship Shows since 1984, I have showed at Crufts when it was still being held in Earls Court, London and have exhibited almost every year since it was held at the NEC, Birmingham. 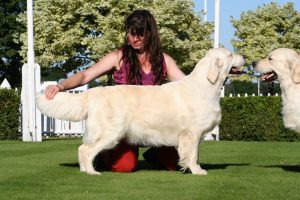 My ambition was always to win and be able to make up my dogs into champions………. so a dream come true was to gain the title of “SHOW CHAMPION” with my REMINGTON REQUISITE OF RAMCHAINE ~ ‘Jazmin’ won her first CC at 22months and went on to win her title at the age of two and the rest of her 10 Challenge Certificates & RCCs between each of her 4 litters with her 10th CC being achieved at 9 years young!! 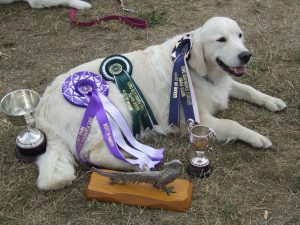 It is always special to breed and own your own champions,  my first homebred title holder was the loveable ‘Jiorjia” alias
‘SH.CH.RAMCHAINE RUBELLITE JW’ 4 CCs 2 RCCs.

I am fortunate to have achieved great success nationwide in the UK with my ‘Ramchaine’ affix and Golden Retriever Show Team : ~ consistently winning numerous Firsts, Championship Show Placings, ‘Best Puppy’ , ‘Best Veteran’ and ‘Best of Breed’ awards ~ and to date the “Ramchaines” have won over 35 Challenge Certificates , 25 Reserve CCs as well as producing Junior Warrant Winners, KC Stud Book Numbers, CAC, CACIB, RCC & CC winners for other people. Internationally there are now Ramchaine champions in Norway, Russia, Finland & Holland as well as the UK. I am proud to have bred the TOP WINNING Golden Retriever Puppy for 2006 ~ SH.CH.RAMCHAINE GREEN GLOW by FENWOOD JW ~ who went on to achieve over 75 Junior Warrant points and then her Title at the tender age of two years. The numerous achievements of various RAMCHAINE progeny accumulated to the award of the “Our Dogs” TOP BREEDER AWARD for 2007 and for 2008, as well as the “DOG WORLD” TOP BROOD BITCH  AWARD with “Jazmin” in 2007, 2008, 2010, & 2011. 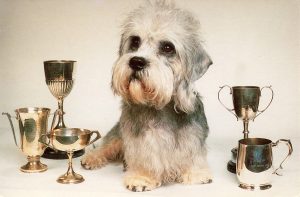 I have also prepared, handled and campaigned the Dandie Dinmont Terrier ‘CH. SENACRE HOOGHLY’, belonging to Sheila & Paul ( Yazga) to win his Junior Warrant and the title of Champion.

I enjoy attending lectures, seminars, symposiums and courses and have attended many on canine studies, hereditary defects, hydrotherapy, the musculoskeletal system, first-aid and conformation to name but a few .
I have done many Grooming Demonstrations for Road Show Workshops and Teach-Ins across the UK and have carried out demonstrations for DeZynaDog, the GRC, and MGRC, aswell as running private tuition in trimming and preparing for the show ring & pet.
I have also had the privilege and trust to have groomed many well known dogs including Champions for the Show Ring in several breeds.

So far it has been a very active and often hectic lifestyle, juggling a flourishing business and family life with my sons and my dogs whilst pursuing my hobbies of training, Showing, Breeding, Agility and obedience!
I started judging in 1991 and over the years have completed many Open Show appointments, and then completed the necessary criteria to be approved by the Kennel Club to award  Challenge Certificates ~ CC’s too.

For a few years before I moved to the Netherlands  I have also helped to organise and run events as a committee member of the Southern Golden Retriever Society. 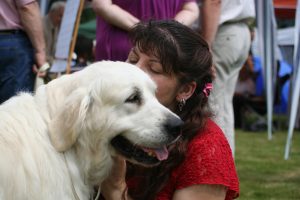 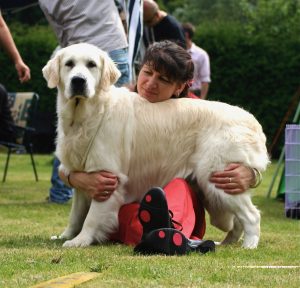 In April 2008 I was offered
the challenge of looking after
and campaigning
a young male golden
from The Netherlands
……… so in May 2008
entered BARNUM OF THE HELLACIOUS ACRES into the lives of my family and I.
He quickly stole our hearts for the fun loving, easy going, steady, laughable character he is………. and so began an acquaintance with his owner …. BART …. which was to have life changing consequences by the August of 2008…….as we found out we had an awful lot in common, could get along very easily together and ………love blossomed …..!!!! 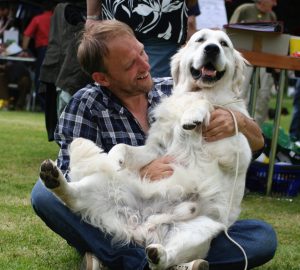 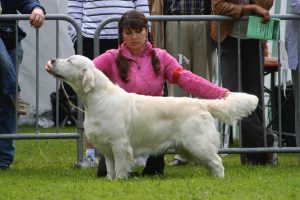 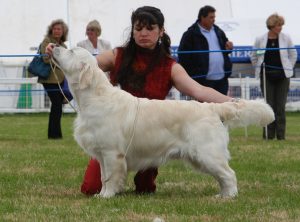 In less than six months since his arrival into the UK ~  *BARNUM*~  achieved the goal of his UK SH CH title to add to his GERMAN, VDH, and DUTCH CHAMPION TITLES…..and came back to his home country to win BOB &  the prestigious Amsterdam Winner Title in 2008 , and was shortlisted in the group. 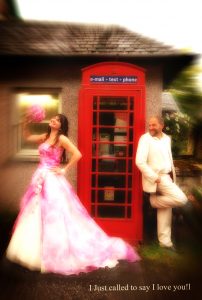 In AUGUST 2009 myself, sons, cats and the RAMCHAINES started the move from our England home and came to join Bart and the HELLACIOUS ACRES to live in Holland, and in AUGUST 20010 Bart and I got married !! 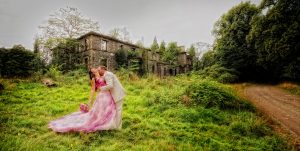 Together we now have over 11 Champion Titled winning Goldens living together in our home, with some upcoming promising youngsters …. 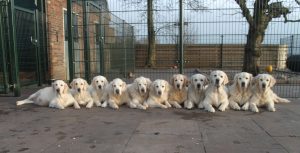 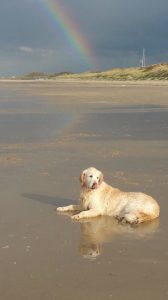 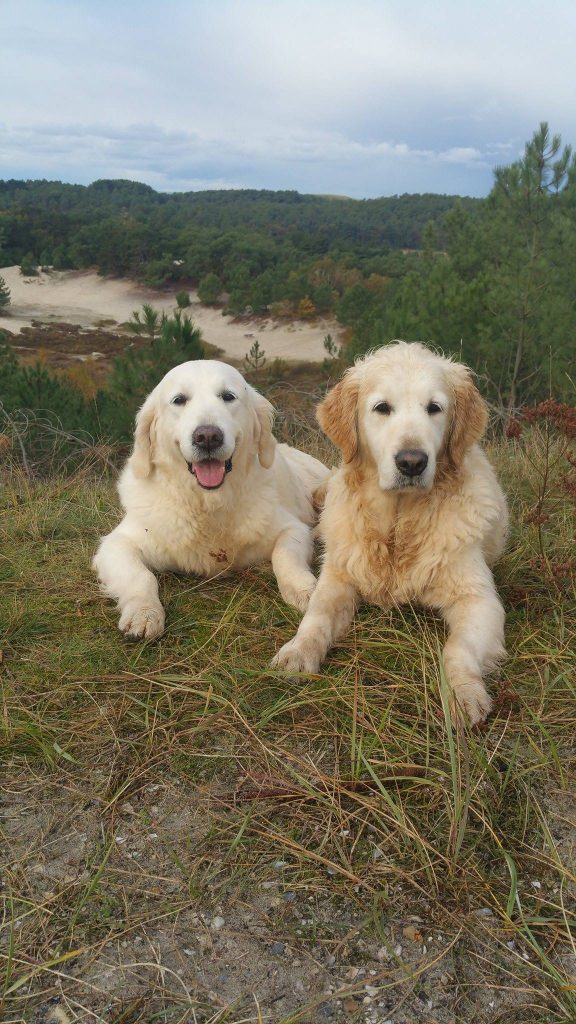 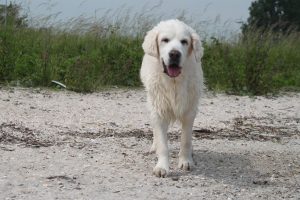 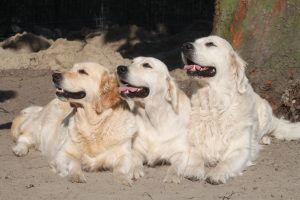 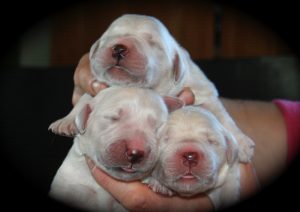 ~ Our new babies ~
a combination of Ramchaine & Hellacious Acres breeding made their debut in 2010 …..
and over the years to follow,
more combined breeding of our lines together to keep
type, temperament, health , character & conformation foremost has been the main aim and success of our kennel 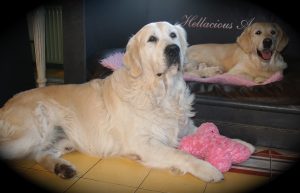 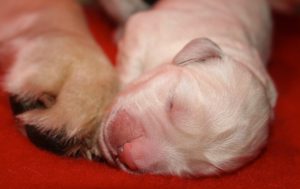 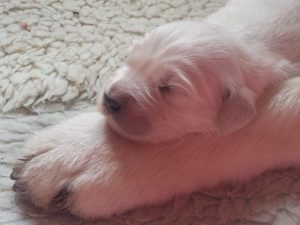